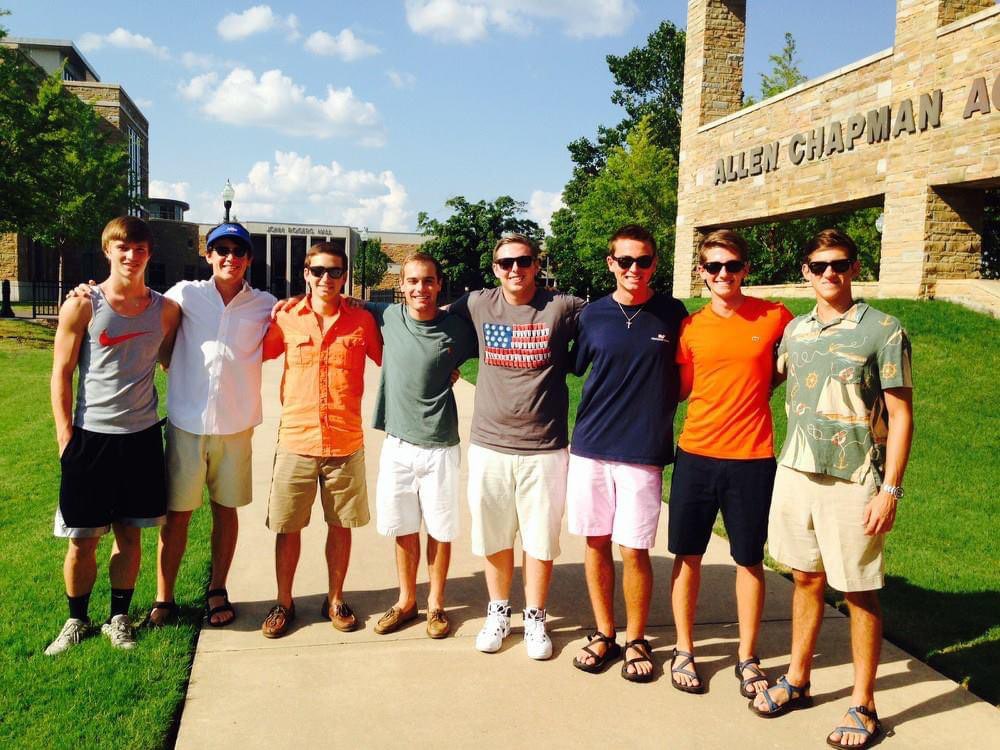 Each week the lowest score in my fantasy league has to write a 1,000 Love/Hate blog (very original idea) on a topic of the winner’s choosing. The lowest score this week was me.

I’m playing in a dynasty league which drafted this year, and we started the season in Week 8 of the NFL’s regular season. It only took me five weeks in to have the lowest score in the league and be stuck with this terrible punishment assignment. I thought I’d at least get a topic like charcuterie or Christmas movies to write about so I could make some good jokes about cured meats or the dumb Die Hard debate and then fill in the rest of the blog with some Wikipedia paraphrasing. Instead, I was given a very niche and specific topic that I’m sure is going to play well with the SNG audience: talk about the above picture and roast our commissioner Kyle’s outfit. If you don’t know which one Kyle is, he’s the doofus in the middle looking like a middle schooler just old enough to not be shopping at GAP Kids any more but just young enough to not realize that the American flag made out of ping pong balls and red solo cups is just about the lamest visual you could rep. Here’s a closer look at what many are calling the worst outfit since Chris Christie tried on a pair of baseball pants.

No, honestly, I’m just kidding. I don’t really see much wrong with this outfit. Sure, the shorts are far too long, but who wants to see another person’s knees anyway? Yeah, the shirt looks to be about the same quality as a Yankees jersey you can buy outside the stadium for $11 and a Big Mac. I mean look at those janky ping pong balls and the way the cups refuse to come close to lining up with each other. I’ve known Kyle since high school and once saw him miss 17 straight free throws in gym class without so much as even hitting the rim a single time. Should a guy with that kind of athleticism OWN Nike high tops let alone wear them on his fraternity bid day? I don’t know, that’s for you to decide.

As for me, I abstain all criticism of this kind of outfit. I just don’t have any ground to speak. My wardrobe consists of Hawaiian shirts for the summer and baggy sweatshirts and sweats for the winter. As a senior, I used to wear overalls every Tuesday in high school and tried to pretend that “Overall Tuesday” was a well known fashion statement even though it was just me, a sophomore that looked like an eighth grader, and a teacher that I’m pretty sure didn’t know how to communicate with other adults that would participate.

I wore these fits in public on more than just the few occasions that I was photographed with them. Sure, I could use the excuse that I’m colorblind so I don’t always know what matches with what. Or I could tell you that I just really vibe with being different, and I’m trying to be a trailblazer. But the truth is – I just simply don’t care. Roast me all you want, but I’m still going to just keep wearing checkered shirts with striped pants because I’m just not going to put in the effort to go out and buy new clothes.

I’ll never forget being in college on night and being at a sick house party (like 16 kids that weren’t invited to any frat or sorority parties) and out of the corner of my eye seeing a beautiful blonde lady (20 year old drunk college girl) eye me up while I played a masterpiece game of pong. As the game concluded and I got ready to walk over there and talk to her, I noticed that she had turned her attention elsewhere only to leave maybe 10 minutes later – presumably heading over to a football party where they were crushing Natty Lights and eating ass…or whatever college athletes do at parties. Anyway, I asked my friend what her deal was, and he told me she thought I was really cute until she realized that not only was I wearing sneakers, but they also had a hole in them. Whatever, if she couldn’t handle me at my best, she clearly wasn’t going to be able to handle me at my worst. (That’s a true story by the way.)

Long story short, asking me to roast Kyle is like asking Matthew Berry to write an entire Love/Hate article without mentioning Avengers: End Game and how the Russo brothers thought he was funny or wanting Steve Rannazzisi to not say New York City when you ask him where he was on September 11, 2001. The point is, I’m just not going to do it. I don’t have a leg to stand on. But that’s enough about my wardrobe, let’s get into my love/hate of the week.

Socks with Nike slides: A lot of people will tell you this makes you look like a freshman in high school or the dad that still shows up to frat parties, but what they won’t tell you is how damn comfortable it is. Not only does it keep your feet from smelling like your five-year-old pair of sandals, it also allows attractive women to not have to stare at your ingrown toenails in public.

Cargo Shorts: I know, I know. The only time you should wear cargo shorts is never, but as someone who frequently wore these until I was 20, take it from me. The extra pockets are great for holding things like your calculator, your Galaxy 8, and your virginity card.

Whatever Nicolas Cage is wearing: More than anything I just needed an excuse to include this picture in the blog. How could anyone look at it and tell me it’s not the greatest look of all time? The short answer is, they couldn’t.

Josh Allen: I love Josh Allen as much as anybody, and, damn, does he look good in shorts. The guy has a rocket arm and an even better personality, but are we really expecting him to light up the 49ers? This is the same defense that held Heisman Trophy winner Kyler Murray to 11 fantasy points last week. Allen doesn’t even have a Heisman; I don’t like his chances. With that potential ankle and knee injury this week, Allen is riding my bench.

Derrick Henry: Typically Henry is a no-brainer to start. The guy is a fantasy monster that’s currently third in the running for league MVP this season. I just don’t like his chances this week against Myles Garrett and the rest of that Cleveland front. Smart managers are staying far away from Henry in week 13.

Cooper Kupp: Matthew Berry’s little Cooper Kupp is a fantasy roller coaster. There’s not a more dangerous place to be in the middle of a pandemic than an amusement park. If I owned Kupp, I’d be playing someone like John Hightower or Darius Slayton this week to avoid any kind of COVID exposure.

Adam Thielen: Do you guys get the joke yet? I’m just naming players on the Dome’s Diddlers.

Thanks for reading. Hopefully this will be the last time I have to write this blog this season.