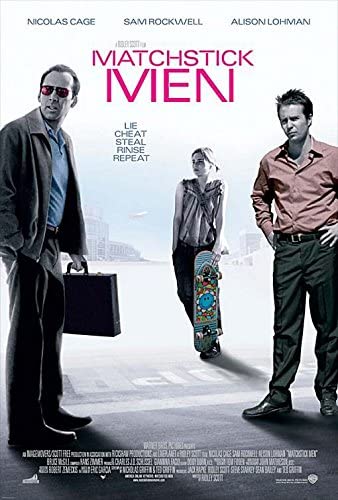 I’m sure you’ve heard by now, but I’m one of the hosts of Spotify’s #1 (in our mom’s hearts) movie podcast The Wicker Men. We’ve been watching all of Nicolas Cage’s movies in chronological order because we’re masochists and single, and we just got up to Matchstick Men. I’ve never really been the kind of guy that can write out a legit review for a movie – I’m no Roger Ebert – but I wanted to give it a bit of a shot with this one. I really enjoyed it, and we’re not reviewing the movie until next week, so I wanted to get something out about it.

The thing that I love so much about Nicolas Cage is that he puts his entire personality into every single role. Sometimes it really works out (Adaptation), and other times it’s the complete wrong choice (Peggy Sue Got Married). Matchstick Men is a prime example of it working out.

Cage plays Roy Waller, an obsessive compulsive and phobic con artist who meets his daughter that he never knew existed in the midst of trying to pull off the biggest con of his career. And, man, Cage pulls out all the stops in this one. The way that he portrays this struggling man is, at times, over the top but generally very believable. I found myself having a deep sense of pain for Roy throughout a movie that’s billed first as a comedy. And while it does have many comedic elements, it also has a lot of real and heart-warming moments.

Probably my favorite aspect of this entire film is that we get to watch Cage’s Waller learn how to deal and cope with the things that have held him back for the past 14 years since his wife left him. It’s very moving watching a man, who at the start of the film is unable to open the door to his home without counting to three each time and cleaned his entire house because of a tiny stain, welcome his pigsty of a daughter into his home.

This kind of character could have easily gone in the direction of Tony Shalhoub’s portrayal of Monk – a character far too cartoonish to be believable. Instead, Cage builds up Roy Waller into a man that is both believable and sympathetic. Waller is also not without flaws which worked to build my compassion for him.

And it wasn’t just Cage that delivered a top notch performance. Sam Rockwell’s Frank Mercer is one of my favorites of his characters. He plays his part so perfectly that you fall right into the con that everyone else does. The supporting actor who really stole the show though was Allison Lohman’s Angela. She plays Waller’s 14-year old daughter who has been introduced into his life and ends up becoming a part of his criminal endeavours. But more than that she is a vessel for Waller to grow as a person, and, aside from her horrible fake crying, she delivers a performance that was worthy of her Golden Schmoe nomination.

And, finally, let’s not forget about Ridley Scott who was able to break away from his normal genre as a director to make this cast flow so well together. I think that one of my favorite things about this movie is that I have seen it three times, and I never remember how the con ends. I am always so gripped by the storytelling and the characters that I forget how it all wraps up. I always feel like a first time viewer that is getting a chance to just enjoy the ride.

I wanted to write this quick review (or whatever you want to call it) to bring back attention to Matchstick Men, a movie that is loved by audiences and critics but has not been seen by nearly enough people. Go out and watch it. You’ll thank me later.