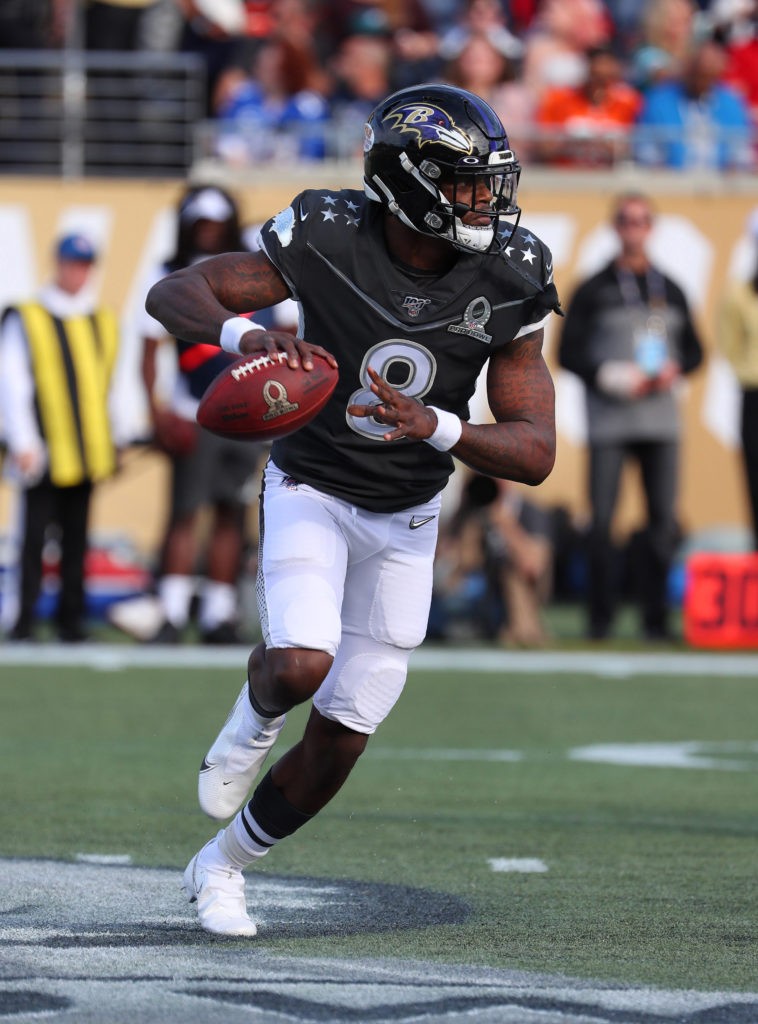 #1 Lamar Jackson, Baltimore Ravens
This is such an obvious given of a pick that I almost feel dumb putting it on the list. Lamar was the league MVP last season and should only get better this year as the Ravens have worked to bring in more weapons around him. Lamar can kill teams through the air and with his legs which makes him so dangerous. He’ll outscore your opponent’s best running back on the ground while also adding 250 yards through the air. He had seven games last year with more than 85 yards on the ground and three with more than 115. Add to that his 43 combined touchdowns next to just 8 turnovers and it’s obvious why he averaged 6.6 points per game more than the next highest quarterback.
2019 stats: 3,127 yards passing, 36 TDs and 6 INTs; 1,206 rushing yards, 7 TDs and 2 lost fumbles

#2: Patrick Mahomes, Kansas City Chiefs
Patrick Mahomes won the league MVP in 2018 and the Super Bowl MVP in 2019. How’s he going to follow it up this season? You can probably just expect more of the same. Despite missing 2.5 games last year due to injury, Mahomes still managed to finish 7th in the fantasy quarterback rankings with 287 points. While his injury might decrease some of his mobility this year, Mahomes is going to have more weapons than he can count on the field with Hill, Watkins, Kelce, Edwards-Helaire, and the rest of the crew. If it wasn’t for Lamar’s rushing ability, Mahomes would be the easy first quarterback off the board in any league.
2019 stats: 4,031 passing yards, 26 TDs and 5 INTs; 218 rushing yards, 2 TDs and 2 lost fumbles

#3: Kyler Murray, Arizona Cardinals
The Kyler Murray MVP hype is real. He was a bit hit-or-miss in his rookie season with five games over 300 yards passing and six games under 100 yards but still had a top-10 fantasy quarterback finish with 285 points on the season. Murray enters this year with a season of Kliff Kingsbury’s offense under his belt and now has DeAndre Hopkins to have a catch with. Oh yeah, Christian Kirk also has a year under his belt and is ready to explode in this offense. After Mahomes and Jackson are gone, Kyler Murray needs to be the next quarterback taken off the board.
2019 stats: 3,772 passing yards, 20 TDs and 12 INTs; 544 rushing yards, 4 TDs and 2 lost fumbles

#4: Dak Prescott, Dallas Cowboys
I think that the majority of the football community has turned on Dak because we all got so sick of hearing about his contract negotiations. What a lot of you have failed to remember is that this is a guy who nearly passed for 5,000 yards last season and had four 300+ yard games and three 400+ yard games. Prescott’s offense adds in CeeDee Lamb this year to go along with Ezekiel Elliott, Amari Cooper, and an emerging Michael Gallup. The sky is the limit for Dak in another contract year this season.
2019 stats: 4,902 passing yards, 30 TDs and 11 INTs; 277 rushing yards, 3 TDs and 2 lost fumbles

#5: Tom Brady, New England Patriots
Yeah, he’s 43. Yeah, he looked “bad” by his standards last season. Yeah, he’s learning a new offense during a socially distanced training camp. Whatever. He’s Tom Brady, and he’s being drafted after the 8th round in most leagues. This guy is going to be in a Bruce Arians offense and throwing to Mike Evans, Chris Godwin, and Gronk…just to name a few of his options. Arians was helping Carson Palmer throw for 4,000+ yards at the end of his career. You don’t think he could do that with Brady too?
2019 stats: 4,057 passing yards, 24 TDs and 8 INTs; 34 rushing yards, 3 TDs and 1 lost fumble