Top 5 Competitive Eaters of All Time 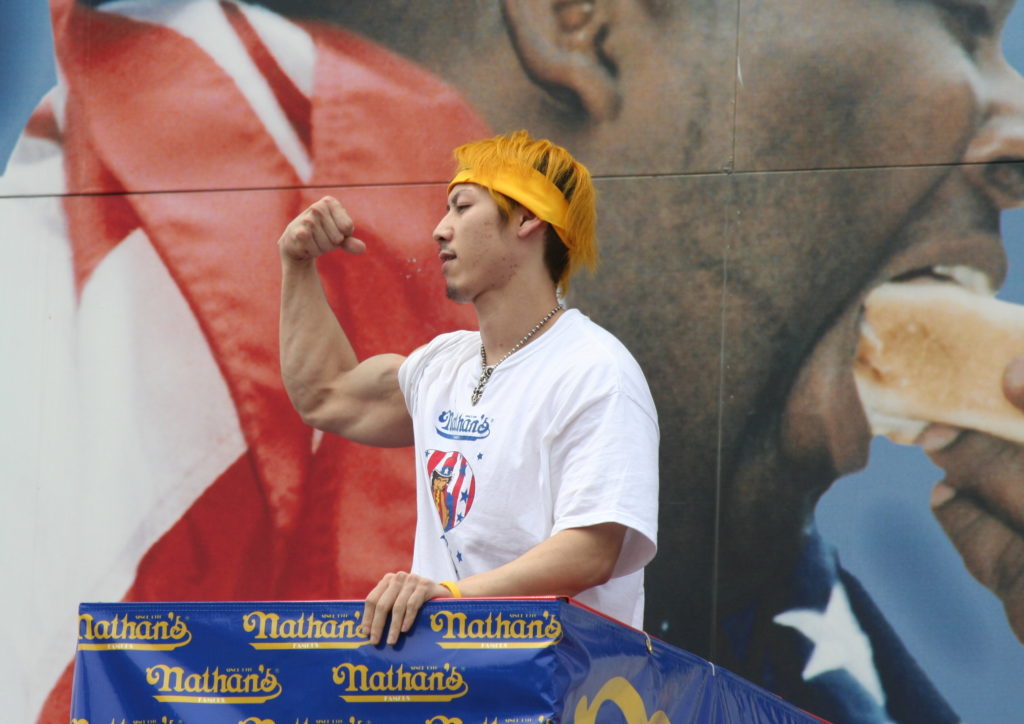 The Nathan’s Hot Dog Eating Contest, aka my favorite day of the year, is tomorrow, and it got me thinking about some of the greats to ever compete in this hallowed sport. So, I did what all sports writers would do and created a top 5 list of the best to ever do it.

#1: Takeru “Tsunami” Kobayashi
I’m sorry if putting Kobayshi in the #1 spot offends any of you Chestnut stans, but it had to be done. Kobayashi vs. Chestnut is like MJ vs. LeBron, and, quiet frankly, Kobayashi is MJ. Not only was he first, but he was better. He revolutionized the sport of competitive eating and made it what it is today. His performance in the 2001 Nathan’s Hot Dog Eating Contest when he ate 50 hot dogs in 12 minutes will always be looked at as the moment that the game changed forever. He then won another five consecutive events before being dethroned in 2007. Kobayashi is considered “the godfather of competitive eating” and his allure remains since he has not competed at Coney Island due to contract disputes with Major League Eating (or whatever it is) since 2008. Some of Kobayashi’s other big achievements include eating 106 tacos in 10 minutes, 62 slices of pizza (15.5 pizzas) in 12 minutes, and 60 bunless hot dogs in 2 minutes and 35 seconds for the State Fair of Texas record.

#2: Joey “Jaws” Chestnut
If we’re continuing with the MJ vs. LeBron analogy, then it’s obvious that Joey Chestnut had to be #2 on this list. The man is a complete animal. He devotes all of his time to training and working out his jaw. It’s actually kind of freaky to watch. He won eight straight hot dog titles between 2007-2014 before losing in 2015. That just started a new streak as he is working on four in a row and 70+ hot dogs in each of those competitions. He’s devoted his life to competitive eating, and the work has paid off as he is currently the best eater on the planet. Chestnut’s other top food has to be wings in which he won three straight United States Chicken Wing Eating Championships in Buffalo, New York.

#3: Tim “Eater X” Janus
The casual competitive eating fan might think Janus is a fraud because he rarely puts together a great performance on July 4. The true competitive eating fan though knows that Eater X specializes in some of the more off-the-radar events. His biggest accomplishments have been 71 tamales in 12 minutes, 26 large cannolis in 6 minutes, 11.8 pounds of burrito in 10 minutes, 10.5 pounds of Ramen Noodles in 8 minutes, and 4 pounds of tiramisu in 6 minutes. Also, any fans of The Amazing Race will surely recognize Janus from “Team Chomp” in the 30th season when he competed alongside Chestnut.

#4: Patrick “Deep Dish” Bertoletti
Bertoletti is known at Coney Island for his signature mohawk. The guy can crush hot dogs early but doesn’t always have the chewing stamina to finish strong. He’s got a load of top-5 finishes at the Nathan’s Hot Dog Eating Contest despite never winning one, but that isn’t the only food he excels at. “Deep Dish” is famous for eating 16 eight-ounce corned beef sandwiches in 10 minutes, 13 pounds of poutine in 10 minutes, and 444 wings in 26 minutes. He also set a world record by drinking 2.5 gallons (9.5L) of milk in an hour.

#5: Richard “The Locust” LeFevre
The man’s in his mid-70s, loves eating in 30+ minute competitions, and competes alongside his wife. What’s not to love? He’s had a strange career because when he was younger he loved the long competitions and seemed to get better as they would go on. He dominated buffets and chili mostly. Then, as he got older, he decided to show the young guys that he still had it and set world records in birthday cake (five pounds in 11 minutes and 26 seconds) and jalapeno peppers (247 in eight minutes). This man is a legend and deserves our respect.