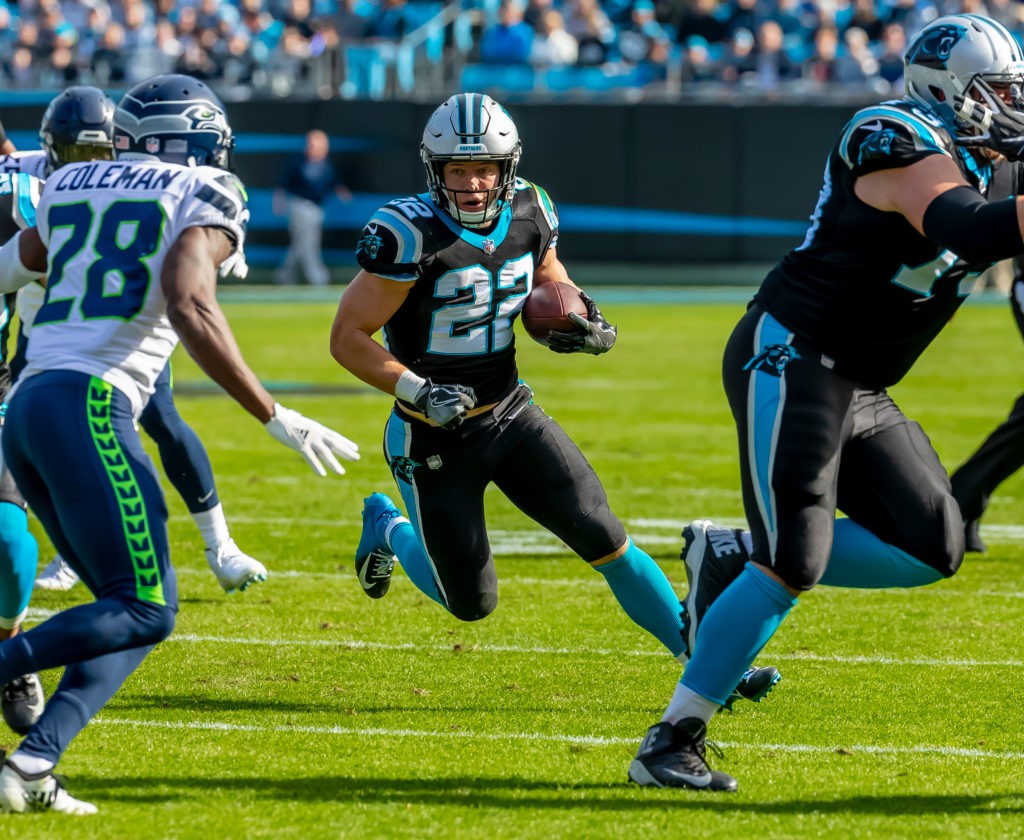 #1: Christian McCaffrey, Carolina Panthers
Duh. I could end the explanation right there. Last season, McCaffrey finished the year with 413 fantasy points. There wasn’t another player that broke 300. McCaffrey had five multiple touchdown games. He had over 200 yards in two of them. This guy will win you weeks all by himself this year. I don’t expect him to have another 1,000 and 1,000 season, but if anyone is going to do that in back to back years, it’s McCaffrey.
2019 stats: 1,387 rushing yards and 15 TDs; 116 receptions for 1,005 yards and 4 TDs

#2: Ezekiel Elliott, Dallas Cowboys
Elliott was a little bit more inconsistent than his fantasy owners would have liked last year, a season in which he was held under 50 yards rushing four times and had a 53 yard performance in week 1. But that was under the old offensive regime that just couldn’t figure out how they wanted to use their top four fantasy quarterback and running back combo. I’d expect a lot more of the 100+ yard games that we’ve come to expect from Zeke in the past. I’d also expect him to be more heavily involved in the passing game in McCarthy’s offense.
2019 stats: 1,357 rushing yards and 12 TDs; 54 receptions for 420 yards and 2 TDs

#3: Saquon Barkley, New York Giants
The concern with Barkley is always going to be injuries (he missed 3.5 games last year) and the Giants offense. I wouldn’t pass on drafting Barkley because of injury concerns because every fantasy football player has injury concerns due to the nature of their sport. I also wouldn’t pass on him because of the Giants offense. They seemed to click near the end of the season under the leadership of Daniel Jones, and they have an entirely new coaching staff in the building this year. I like Barkley’s chances to perform closer to his rookie season numbers than last year’s.
2019 stats: 1,003 rushing yards and 6 TDs; 52 receptions for 438 yards and 2 TDs

#4: Clyde Edwards-Helaire, Kansas City Chiefs
Fine, I’ll admit it. I’m buying into the Edwards-Helaire hype. He’s joining the best offense in the NFL as an explosive pass catching back out of a backfield that has made every single running back it’s had look good. And he kicked ass in college. This is a perfect fit for a team that’s looking to have a Super Bowl championship repeat. Edwards-Helaire is my ride-or-die player this year that I think you need to draft in the top 5.
2019 college stats: 1,414 rushing yards and 16 TDs; 55 receptions for 453 yards and 1 TD

#5: Derrick Henry, Tennessee Titans
Derrick Henry rose to fantasy prominence over the back half of the season last year and in the playoffs. Between weeks 10 and 17, Henry had 10 rushing touchdowns which is almost unheard of. He figures to be a huge part of the Tennessee offense again this season and should be a huge point scorer on the ground for fantasy owners. Teams in PPR leagues will likely be wary of his 18 catches last year, but when a guy can rush for over 1,500 yards, a lot of the other stuff can be forgiven.
2019 stats: 1,540 rushing yards and 16 TDs; 18 receptions for 206 yards and 2 TDs

#6: Dalvin Cook, Minnesota Vikings
When Dalvin Cook is healthy and included in the game plan, he’s one of the best running backs in the league. But, over the span of three years in the league, he’s missed a total of 20 games. Also, last season, Cook had five games with fewer than 50 rushing yards and three with fewer than 30. He had four games last year with fewer than 15 rushing touches and two with fewer than 10. That’s not great for a player that’s not the focal point of the team’s passing game. Cook has the potential to be great this year and win you quite a few games, but it’s the down weeks that will be a concern for his fantasy owners.
2019 stats: 1,135 rushing yards and 13 TDs; 53 receptions for 519 yards and 0 TDs

#7: Nick Chubb, Cleveland Browns
Why does it feel like everyone has forgotten about Nick Chubb? I know that Kareem Hunt is playing for a full season which takes touches away from Chubb, and I know that this offense is overflowing with weapons, but Chubb is still an elite back that finished just 47 yards short of being last year’s rushing champion instead of Henry. Chubb had seven games last year with over 100 yards rushing and another two over 90. Hunt will take production away from Chubb in the passing game which keeps him from being able to be higher up on this list, but that shouldn’t be enough of a deterrent to lead to Chubb’s current mid-second round grade.
2019 stats: 1,494 rushing yards and 8 TDs; 36 receptions for 278 yards and 0 TDs

#8: Alvin Kamara, New Orleans Saints
I do have some concerns about Kamara this season. He was killed last year by missing two games with injury and not having the touchdown production that he had in 2018. He scored two in weeks 3, 16, and 17 last year but was shut out of the end zone otherwise. This led to a very disappointing 208 points scored for a player that was drafted in the top 5 of most leagues. Kamara’s biggest value is going to come in the receiving game, so if you build your team around drafting him in the top 10, you’ll have to hope the Saints offense is more explosive in 2020 than in 2019.
2019 stats: 797 rushing yards and 5 TDs; 81 receptions for 533 yards and 1 TD

#9: Austin Ekeler, Los Angeles Chargers
I’m a huge believer in Austin Ekeler, and, with Melvin Gordon gone, he’s going to get a chance to prove that he can be more than just a receiving back. I expect similar production from Ekeler this year as we saw from Kamara in 2018, his first without Mark Ingram. The Chargers offensive staff has already talked about how big of a role they expect Ekeler to play, and it doesn’t feel like it’s just lip service. This guy is going to get his touches.
2019 stats: 557 rushing yards and 3 TDs; 92 receptions for 993 yards and 8 TDs

#10: Josh Jacobs, Las Vegas Raiders
Josh Jacobs REALLY gelled last year in Jon Gruden’s offense but was held back by nagging injuries that forced him to miss three games and be limited in a couple of others. Jacobs enters his second year as the guy for the Raiders, and I expect him to show why he was given that big responsibility. Fantasy owners in PPR leagues would hope to see more production from Jacobs in the passing game this year, but if he can increase his yards and touchdowns on the ground, then he’s more than worth his current late-second round grade.
2019 stats: 1,150 rushing yards and 7 TDs; 20 catches for 166 yards and 0 TDs