SNG Weekly Wrap Up: The Worst Four Ball Of All Time 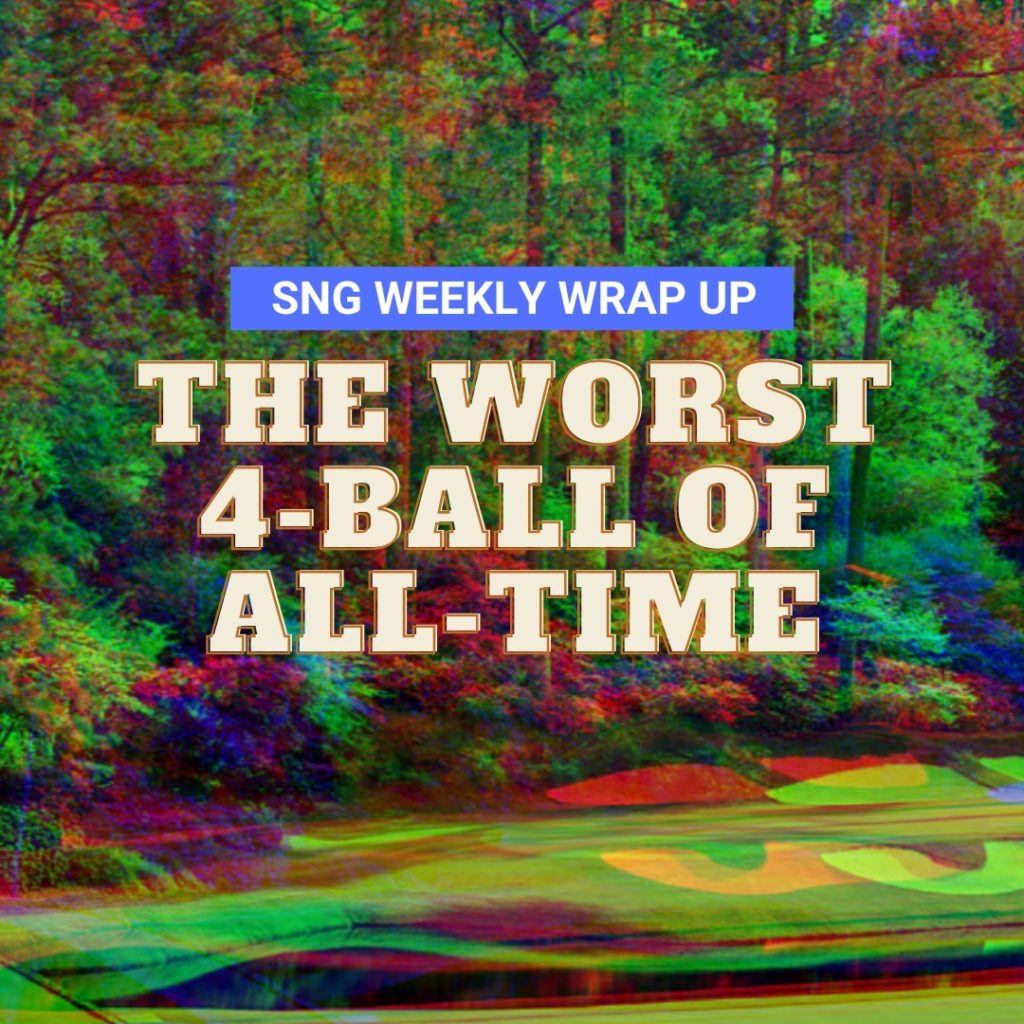 With the Masters taking place this weekend, it got me thinking about what would be the worst four-ball grouping of all time. I’m basically talking about walking up to the course by myself and being stuck with the seven people below for an entire day. So, as the Weekly Wrap Up crew, we put together the golfer & caddie that would drive us all personally insane. I’ve put the YouTube link for the entire show above because for some crazy reason WordPress never lets me embed this show. I think it’s a conspiracy. But if you’d like to skip watching us actually talk about our picks, my explanations are below, and the full four-ball pairings are at the bottom.

Golfer 1: Chesley “Sully” Sullenberger with caddie Brian Williams
I don’t know why I have such a personal vendetta against the universally loved Chesley “Sully” Sullenberger, but it’s something that I’ve just never been able to get over. Maybe it’s the fact that he did his job poorly by flying into a flock of birds and then saved his mistake by landing in the Hudson River. Maybe it’s that his story brought about what could be the worst scene in cinematic history (below). And then, of course, the other reason I wouldn’t want to golf with this guy is that he’s got one story. Imagine spending four hours golfing with someone and every time you passed a water trap he made a “funny” comment about wishing he could land his ball on top of the water like he did that plane. It would be too much. And obviously if you have someone telling stories like that, the worst person to have paired with them would have to be Brian Williams. Sully will be telling us for the 6th time how he saw his life flash before his eyes as the plane neared the water, and Williams will jump in and interject with a story about jumping out of a plane at 30,000ft without a parachute but being saved by some eagles who all grabbed him with their beaks and taught him how to fly. It would be insufferable.

Golfer 2: Billy Cosby with caddie Ludwig Van Beethoven
That was a typo adding a “y” to the end of Bill Cosby’s first name, but now I’m just laughing thinking about him being Billy Cosby, so I’m leaving it in. I think it goes without saying that Cosby would be horrible to be around for any amount of time, let alone stuck on a golf course with him when you know that the cart girls are coming up around hole 10. He’s also blind, at least allegedly, and the pairing of a blind Cosby with a deaf Beethoven means that communication is going to be really tough. This could turn your four hour 18 holes into at least seven hours which means more time with these awful people.

Golfer 3: The Property Brothers with caddie Chris Christie
In all fairness, I like the property brothers’ TV show. It’s pretty entertaining, but they seem like pretty dreadful people to hang out with. I also liked the visual of figuring out how they’d play together. Would they take turns or would they do that first date thing where they get behind each other and hit at the same time? I have no idea, and, quite frankly, I don’t want to find out. As for Chris Christie, he probably wouldn’t be terrible to golf with for a day. I don’t agree with any of his policies and his voice annoys me, but he’d probably find a way to get the course shut down for the day so we could have it all to ourselves which would be a nice treat. But imagine having Christie as a caddie. It would be terrible. He’d quit after the third hole leaving the property brothers scrambling to figure out how they could both hold the bag. It plays out like a nightmare in my head.

Golfer 4: Me with caddie Carrot Top
Picture this. You’re on the fourth hole, and the first three have been going well. Par, birdie, par to start the day, and you’re staring down 195 yards uphill to the hole to make it to the green in two on a par 4. A birdie here and you could be at 2 under after 4. You ask your caddie what club you should use, and you both land on a 7 iron. He reaches into the bag to grab it for you and instead hands you 7 irons. After a quick laugh at how he was able to get 7 irons into your golf bag just for this scenario, you say, no seriously, can I have my 7 iron? And he nods and gives you a trumpet. It goes on like this for 5 minutes with his iPhone recording of a studio audience laughing playing the entire time. That’s when you give up and ask Sully if he has any good stories just to get away from your caddie.