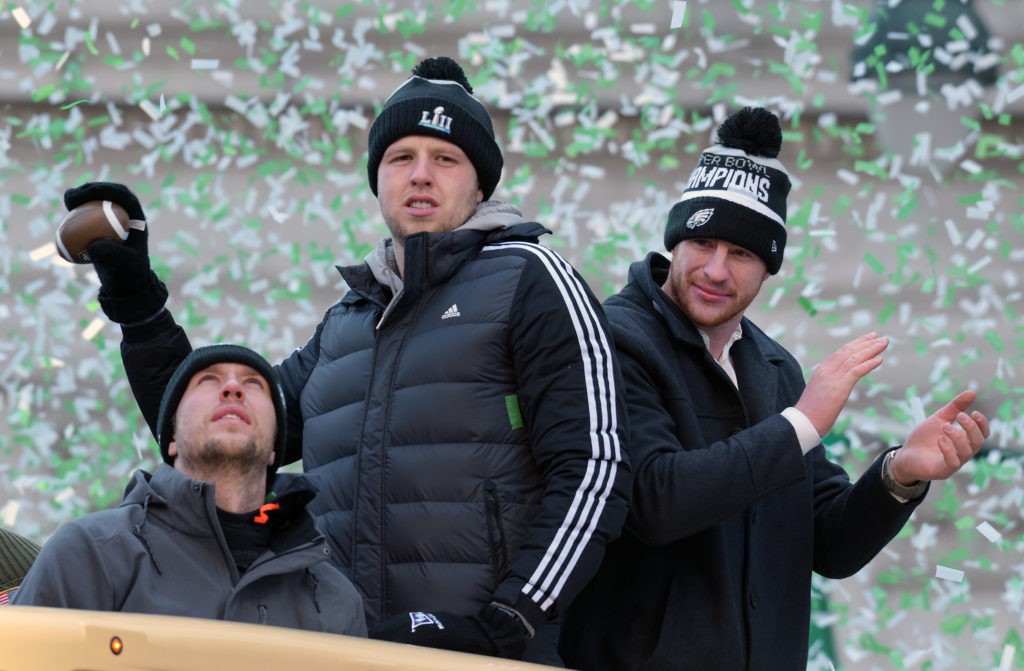 Remember when the Eagles beat the Patriots in the 2018 Super Bowl? That feels like it was 15 years ago at this point. That season, Wentz had 3,296 yards, 33 touchdowns, and 7 INTs while leading the Eagles to an 11-2 record. Then Wentz tore his ACL and Eagles/NFL fans fell in love with Nick Foles. Wentz made his way back to a high level form in 2019 when he played all 16 games and had 4,039 yards, 27 TDs, and 7 INTs before getting hurt in the first quarter of their playoff game against the Seahawks.

These injuries have held Wentz back his entire career and kept him in the good category without ever allowing him to be great…until this year. This year he fell from good and dropped directly to bad. He has started all 12 Eagles games with a record of 3-8-1 which includes one of the most inexcusable ties we have seen in years. He’s averaging just 218 yards per game and has 16 TDs and 15 INTs. Then the season got even worse for Wentz as he was benched mid-game Sunday against the Packers and it was announced that backup rookie Jalen Hurts would start for the rest of the season.

This leaves the Eagles in a tricky situation. Their extension for Wentz of four years and $128 million kicks in at the end of the season. So that’s $32 million per year for the next four years for a guy that, barring injury, is going to be riding the bench for the rest of the season. That’s tough. So let’s say Hurts lights it up for the rest of the season. Where does that leave Wentz? Probably on the trade block, right? It has to be. Here are the three spots that I think make the most sense for a trade.

Indianapolis Colts
For starters, in doing research for this, I discovered that Scott Tolzien started games for the Colts in both 2016 and 2017 which blew my mind. That’s irrelevant, but I just wanted to make sure you all knew about that too. Since Andrew Luck’s surprise retirement before the 2019 season, the Colts have predominantly used Jacoby Brissett and the corpse of Philip Rivers as their quarterback. Neither of those guys are the quarterback of the future. You’d have to think that this would be a desirable place for Wentz to go because he could reunite with Frank Reich, who he’s had the most career success with. And for Reich, I think he’d love to have Wentz back in the fold, especially when this year’s quarterback class is top heavy and the Colts will be at the back end of the draft. I have no idea what it would take to get him, but putting Wentz behind that Colts offensive line seems like a great fit that could restore Wentz to his former glory.

Chicago Bears
Here are the quarterbacks that have played for the Bears since Jay Cutler last took a snap for the team in 2016: Matt Barkley, Brian Hoyer, Mitch Trubisky, Mike Glennon, Chase Daniel, and Nick Foles. That is far too many quarterbacks with far too little production. This team has an elite defense with some talented weapons on offense, but they can’t score. I’d have to think that a team like the Bears would love to have a quarterback like Wentz who still has a high ceiling. Now would Wentz want to be reunited with Foles? I don’t know. The Bears are also still on the hook for that weird Foles contract that they traded for this past offseason. But with a record that’s not bad enough to put them at the top of the draft, if they can get rid of that Foles money, then Wentz makes a good amount of sense.

Denver Broncos
The Broncos have been searching for a quarterback since Peyton Manning retired after the 2016 Super Bowl. Since that time, they’ve started Trevor Siemian, Paxton Lynch, Brock Osweiler, Case Keenum, Joe Flacco, Brandon Allen, Jeff Driskel, Bretty Rypien, and 2019 second round pick Drew Lock. I think John Elway is sick of searching for a player to fill that position. And doesn’t Wentz fit the exact prototype of player that he would typically be drawn to? Unless Elway falls in love with Zach Wilson or Trey Lance, Wentz fills a big need in Denver and can be an immediate fix for an offense that has been non-existent for the last four seasons.