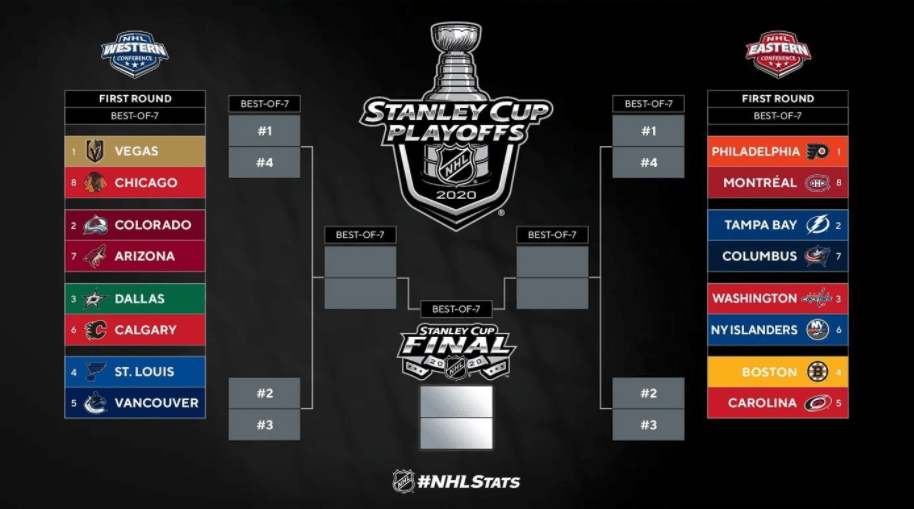 These NHL playoffs have already been great during the qualifier round, and they’re only going to get better now that we’ve made it to the official first round. There’s going to be games on all day every day. Teams are going to be playing back-to-back nights. And some of hockey’s biggest stars will be center stage for all of it. The qualifiers were obviously really weird. The Stars, Blues, and Bruins all looked terrible in the round robin. The Penguins looked like they didn’t even want to be playing, and the Oilers couldn’t figure out how to play that crucial part of any game – defense. But now the playoffs are back to normal. Obviously there’s still no fans, but the Best-of-Seven format is back, and the players should be used to the new circumstances by now. It’s going to be great.

#1 Philadelphia Flyers def. #8 Montreal Canadiens in 5 games
I think there’s going to be a lot of money bet on the Canadiens because of how well Carey Price played against the Penguins, but, like I said up top, it really looked like the Penguins didn’t have a vested interest in playing any of those games. This Flyers team is really good, and their young goalie Carter Hart seems like he could be the next big thing in hockey. I like the Flyers to take this one pretty easily.

#2 Tampa Bay Lightning def. #7 Columbus Blue Jackets in 4 games
There’s some great storylines in the first round, and the Lightning looking for their revenge from last season against the Blue Jackets is one of the best. Columbus rode the elite goaltending of Sergei Bobrovsky to a series sweep of the Lightning, who were embarrassed after setting a regular season record for most points last year. I think John Tortorella is the best coach in the league, and I think that he’ll have his team ready to play, but the Lightning aren’t going to let that happen two years in a row. I’m looking for them to come out fast and strong and never take their foot off the gas.

#3 Washington Capitals def. #6 New York Islanders in 6 games
This series is another with a fascinating storyline: Islanders head coach Barry Trotz up against his old team. Trotz has put together a really strong defense team in New York, but their lack of fire power is going to be an issue against this very strong Capitals squad. The Caps head into the playoffs with a four-headed monster of Alexander Ovechkin, Nikolas Backstrom, TJ Oshie, and Ilya Kovalchuk on offense. Oh, and don’t forget they still have Braden Holtby in net. The Capitals attack for an entire series will just be too strong for the Islanders to handle.

#5 Carolina Hurricanes def. #4 Boston Bruins in 5 games
This is the one upset I’m comfortable picking in the first round on this side of the bracket. The Flyers, Lightning, and Capitals all looked strong in their round robin games. The Bruins did not…at all. In fact, they looked terrible. The Bruins were the only team in the NHL to have 100 points during the regular season, so the talent level is obviously there, but I think they were hurt by not playing in technically meaningful games over these last two weeks. The Hurricanes, on the other hand, were the only team to sweep their opponent in the qualifying round and did it behind the strong goaltending of Petr Mrazek and the out-of-this-world series performance by Sebastian Aho. The Hurricanes are here to play. The Bruins are not.

#1 Vegas Golden Knights def. #8 Chicago Blackhawks in 7 games
This is going to be a great series. The Blackhawks shocked everybody by beating the Oilers in four games in the first round, and I think they’ll be able to ride that momentum to an early series lead. This is likely somewhat of a last shot at the Cup for Kane, Toews, and Keith. The problem, though, is that the Golden Knights are really good. They’re a well rounded team that didn’t lose in the round robin seeding qualifier, and they have one of the most experienced playoff goalies in the league with Marc-André Fleury. I’m hyped to watch this one play out.

#2 Colorado Avalanche def. #7 Arizona Coyotes in 6 games
This is another series I’m really excited to watch. Both of these teams are fast moving and fun to watch. There will be high scoring games and defensive, grind-it-out type games in this series which should add a lot of intrigue. The Coyotes have good star power with Taylor Hall, Phil Kessel, and Christian Dvorak, but the Avs have Nathan MacKinnon, and he could easily be the best player in the league right now. They’ve got better depth at every position than the Coyotes, and they’ve been my Stanley Cup pick since February so I’m bound to it.

#6 Calgary Flames def. #3 Dallas Stars in 6 games
Remember what I said about the Bruins? Yeah, apply that to the Stars and the Blues as well. The Stars looked completely sluggish in their round robin games, and I’m starting to think that Jamie Benn and Tyler Seguin might not be the best pairing together. Everyone keeps waiting for them to take off, and they keep staying stagnant. The Stars have the goaltending with Ben Bishop, but Cam Talbot on the Flames side is no slouch. The Flames also have one of the highest paced and most exciting offenses led by Johnny Gaudreau, Sean Monahan, and Matthew Tkachuk. They have a chance to make a deep run this postseason.

#5 Vancouver Canucks def. #4 St. Louis Blues in 4 games
Like I said earlier, I don’t want to question whether or not teams want to be in the bubble. But the Blues just seem like they don’t. They’re coming off a Stanley Cup championship last season and have a largely unchanged team, but overall they’ve seemed lethargic in the bubble and would not have made it out of the first round with the way they played. The Canucks, on the other hand, were a popular pick to make some noise in the playoffs and are poised to do so in this first round. Is a sweep being a little over-optimistic? Maybe. But I’m feeling it in my gut.