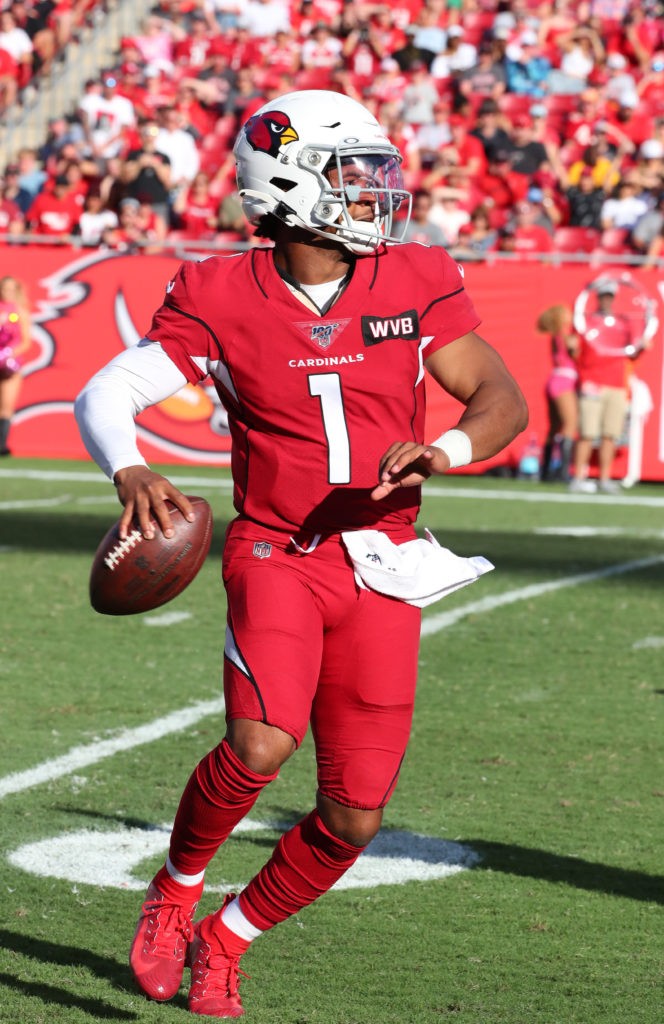 I can’t believe we’re a week and a couple of days away from football starting again. It’s been a long journey to get here, but it looks like it’s actually going to happen. If you’re like me, you have your fantasy football draft coming up this weekend, and one of the hardest parts of the draft always seems to be identifying who is going to have a breakout season. I’m going to do my best to guess the next big breakout guys, and if I’m right and win you your league, feel free to wet the beak a bit.

Kyler Murray, QB ARI
I LOVE Kyler Murray’s chances to break out this year. I can already hear the critics saying that he broke out last year, so this is a cheap pick. But, let’s be honest, even though he finished as the QB8 on the season, there were still too many down weeks for him last year. Murray eclipsed 20 points six times last season which is great, but he also had six games of less than 13.5 points. I expect the reigning Offensive Rookie of the Year to be a lot more consistent this year – his second NFL season under Kliff Kingsbury’s tutelage. Murray can attack opposing defenses with his legs as well as his arm, and he has had the blessing of adding DeAndre Hopkins as a weapon in the offseason. I think you’re looking at a top-5 fantasy quarterback this season that has a chance to jump into the top overall spot.

Daniel Jones, QB NYG
Daniel Jones seems to be a popular pick in this category, and I think that there’s a really good reason for that. Jones played for a really bad Giants team last year but still managed to eclipse the 30 point mark three different times. Obviously, aside from his 28 point performance, the rest of his season was less than stellar, but, just like Murray, Jones is entering his second season with an improved offense built around him. The ability to scramble + a (hopefully) healthy Saquon Barkley should provide opportunity for a much more productive Giants offense in 2020. Jones isn’t being drafted in most leagues until after the 13th round, so there is a big chance for a major late-round steal in this year’s draft.

Baker Mayfield, QB CLE
A lot of fantasy football owners seem to be down on Baker Mayfield after an extremely difficult 2019 season, but let’s be fair to the guy. He was playing with one of the most inept head coach/play caller combos in Freddie Kitchens. Kitchens just seemed flat out lost for a large part of last season which directly impacted a lot of Mayfield’s issues. This year, the Browns brought in a stabilized Kevin Stefanski to run the team which should be a very positive step up for Baker. Stefanksi’s offense use’s a lot of two tight-end sets and a lot of play action which should, in turn, mean a lot of completions to OBJ, Landry, Hooper, NJoku, Hunt, Chubb, and all the rest. Have confidence targeting Mayfield late in your draft.

Austin Ekeler, RB LAC
There are some who might consider 2019 to have been Ekeler’s breakout season, but I’d argue that it was just the jumping off point. Ekeler was still being used as a complimentary back to Melvin Gordon but enters this season as the top guy on the depth chart. In games last year in which Ekeler had at least 12 rushing attempts, he averaged 23.25 points. He’ll be seeing an increase in carries this year and should see an increase in the receiving game as well with both Tyrod Taylor and Justin Herbert tossing him the ball. I like Ekeler as a poor man’s Christian McCaffrey and a GREAT second round pick in 2020.

James Conner, RB PIT
I guess James Conner already kind of had his breakout year in 2018 when he rushed for 973 yards and 12 touchdowns and tacked on another 497 yards and 1 touchdown through the air. But last year was a major disappointment for the fourth year back with injury concerns. He had just over 700 total yards in 10 games as the Steelers featured back. I think James Conner is going to bounce back strong and have his first 1,000+ yard rushing season. With Big Ben back in the fold as the Steelers starting quarterback, there should theoretically be fewer stacked boxes for Conner to face this year. That should prove to be a recipe for fantasy football success for Conner during a contract year. If he can stay healthy, James Conner is a top-10 to top-15 running back for 2020.

Chris Carson, RB SEA
Don’t get me wrong, Chris Carson has always been a great back and a top fantasy option. This is the year that he’s going to contend for the rushing title. He’s the #1 back on a team that loves to run the ball. Penny is hurt, and the rest of his competition for touches is lackluster. This is the year where Carson goes from a top-20 fantasy football running back to one of the best backs in the entire league. He’s currently being drafted in the late third round to early fourth round in most leagues which makes him a steal at that ADP.

JuJu Smith-Schuster, WR PIT
I guess this could be called more of a bounce back year than a breakout year, but I’m rolling with it. JuJu Smith-Schuster’s rookie season was legendary. 111 catches for 1,426 yards and 7 touchdowns while playing alongside Antonio Brown and catching passes from Big Ben. Last year? Well, the second year player struggled mightily from Brown’s departure and Ben’s injury which led to a less than stellar 42 catch, 552 yard, and 3 touchdown campaign. But Big Ben is back (nice alliteration) this season, and JuJu should again be a major factor in this offense. Call it a bounce back. Call it a breakout. Whatever it is, it’s going to be big.

Odell Beckham Jr., WR CLE
OBJ is in basically the same boat as Smith-Schuster. He’s an established player that had a difficult transition to a new offense last year. This year should be very different for him. Just like I talked about with Mayfield, the Browns finally have some stability with Stefanski which bodes really well for all of their offensive weapons. Beckham Jr. had just two games last year with more than 100 yards receiving and none came after week 6. He also had just four touchdowns for the entire season. I’m expecting a much bigger fantasy output this year from a guy who used to be a perennial top-20 pick.

Calvin Ridley, WR ATL
Calvin Ridley looked like he was primed to catapult himself into the elite territory last year in weeks 11-14 when he had 27 catches for 295 yards and 3 TDs. Unfortunately Ridley then got injured which brought his season to a grinding halt. Something clicked at the end of last season for the Falcons which is a good omen for Ridley in 2020. If Matt Ryan can have the type of season that he projects to have and the offense continues to roll, then this is going to be a massive breakout season for the third-year Bama product.

Noah Fant, TE DEN
Fant had high expectations in last year’s rookie campaign but was limited by inconsistent quarterback play. He notched two games over 100 yards and four over 50, and he had just one game of 5 catches on the season. Fant ended the year with 40 catches for 562 yards and 3 touchdowns. It’s not unrealistic to expect those numbers to jump up this year. He’s heading into year two of a system with Drew Lock, the quarterback who he saw the most success with in 2019. If you’re not drafting Kelce or Kittle, it can be hard to find a consistent tight end to fill that hole. In the later rounds, there’s none better to draft than Fant, who is poised for a breakout year.