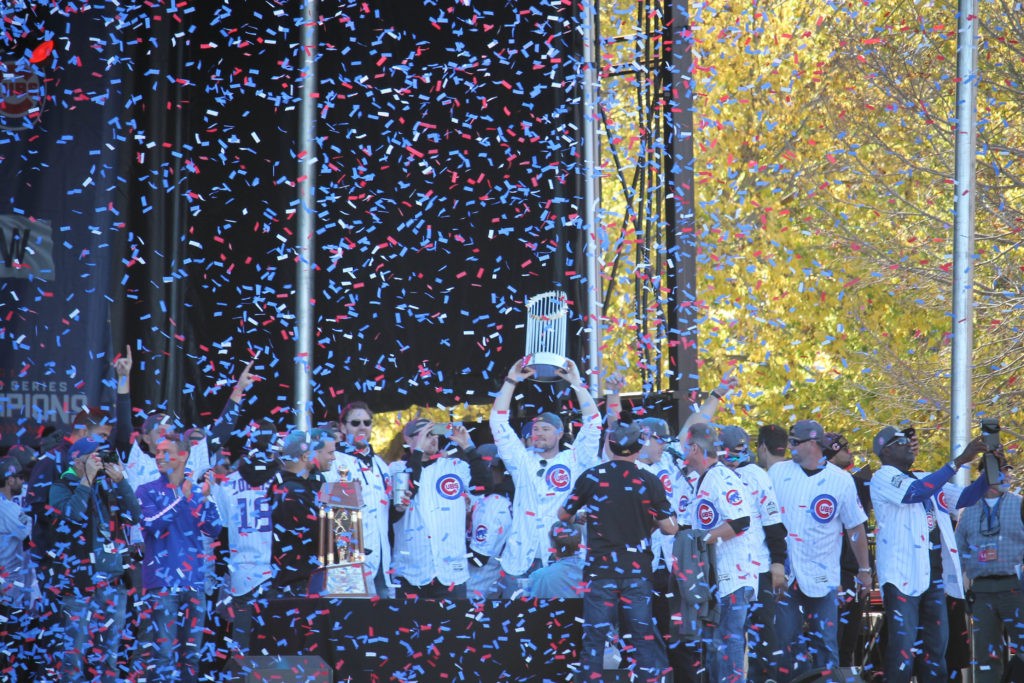 Is there anything dumber as a sports writer (or whatever you want to call what I do) than making playoff predictions before a season even begins? I honestly don’t think that there is. You’re basically just setting yourself up for failure. But baseball is back, I’m excited, and I’ve already picked all of the division finishes, so I feel like I owe to you guys to take a look at the playoffs, too. I looked at all of the win totals I projected for each team and used that to fill up my playoff bracket. If you want to see how I got there, you can use these links for each division: AL East, AL Central, AL West, NL East, NL Central, NL West.

Rays def. Angels
There’s nothing I want more than to see Mike Trout and the Angels make a run all the way to the World Series, but I’m just not going to pick agains the Rays in a one-game format. Their pitching is way too good, and this team hasn’t had quit in them since the early 2000s. They’re one of the hardest teams to beat night in and night out.

Braves def. Brewers
I don’t even love my pick of having the Brewers in the playoffs let alone having them win the Wild Card game. They have the bullpen and lineup pop to do it, but don’t be fooled by last year’s Braves embarrassment to the Cardinals. This is a really good young team that is going to be tough to beat in a playoff setting.

Rays def. Yankees in 5 games
I can’t say enough how much I believe in the Rays this year. Yes, the Yankees have the best lineup in the American League. Yes, they went out and signed Gerrit Cole in the offseason to bolster their rotation. But I still think the Rays have the better overall pitching staff and team. The recipe for success against the Yankees in the postseason has been shutting down their offense from hitting home runs. The Rays have a multitude of different ways in which they score. I’m always going to pick that above anything else.

Twins def. A’s in 4 games
Listen, the A’s are good. I’m finally picking them to win the division, so the “you never give the A’s any credit” crowd can kindly go home. The Twins are just a really solid team with a dominant lineup and a strong pitching staff. I like them a lot better than any gimmicky Billy Beane roster.

Dodgers def. Braves in 3 games
The Dodgers keep dominating the regular season but coming up short year after year in the playoffs. I just don’t see them losing another NLDS to another NL East opponent this year. That lineup is scary good and will be a major problem for any team, especially this Braves team which already struggles with inconsistent pitching. I think the Dodgers roll through Atlanta quickly and easily.

Mets def. Reds in 4 games
I think the Reds are going to make a big leap this year and win the NL Central. I love the top three guys in the Reds rotation, and I think that they have a sneaky scary lineup for the National League. But I don’t think they’re quite ready to make a deep playoff run yet, especially not when they have to start that run against the Mets. The Mets have a strong team that is built for a 60 game schedule and playoffs. They have two legitimate aces and a solid collection of other arms and a lot of different ways to score on offense. This is going to be a tough team to beat at any point in this year’s playoffs.

Rays def. Twins in 5 games
Basically see above for my reasoning. The Twins overall have the better lineup, but the Rays have what I think is the best pitching staff in the Major Leagues. Not only do they have a four-deep rotation of studs, but their bullpen marches out great arm after great arm on a nightly basis. It’s going to be too much for the Twins to handle.

Mets def. Dodgers in 7 games
This is definitely going to be the pick that gets the most heat, but I have to go with my gut on this one. Jacob deGrom, Marcus Stroman, Steven Matz, and Rick Porcello. I’ll take that playoff rotation any day over Clayton Kershaw, Walker Buehler, Julio Urias, and Alex Wood. In the playoffs, especially this late in the playoffs, pitching is what wins you games. The Dodgers bullpen has cost them in the playoffs in the past, and it has not really improved since last year. I know their lineup is dominant, and I think the Dodgers wins will be blowouts, but I think that the Mets will prevail in the close game situations.

Rays def. Mets in 6 games
This has been a weird year, and it’s going to be a weird season. So why can’t the Rays be crowned at the end of it? After 60 regular season games, and my projected 17 playoff games, I think that the Rays are going to walk away as World Series champions. Pitching wins in the playoffs, plain and simple.