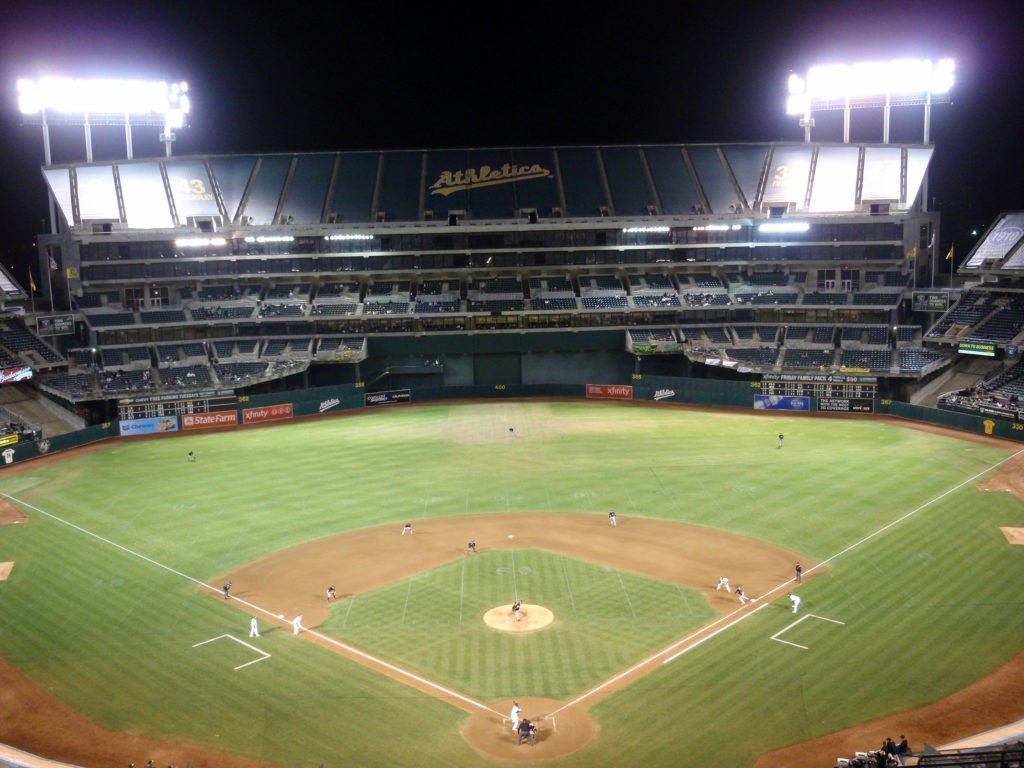 I predicted the American League East and Central divisions earlier in the week, and those felt more clear cut. The Twins and Yankees are powerhouses in their weaker divisions. The West is a toss up. I actually have a feeling that I’m going to regret this blog two months from now when my predictions are so wrong that @OldTakesExposed is digging an early grave for me. With all that said, let’s just jump into it and get this over with.

Winner: Oakland Athletics
I’ve made the mistake of underestimating the A’s each of the last few seasons, and I promised myself that I just won’t let it happen again. I can’t let it happen again. In my AL East predictions, I wrote about how much I love the Rays because of their pitching and defense. I can’t say all of that and then not voice my support for the A’s as well. They don’t have the starting staff that the Rays do, but they utilized “bullpen games” as well as anyone last year with their electric arms from top to bottom. All of those guys are returning this season. They also have Mike Fiers and Sean Manaea who are well above average as starters, and Frankie Montas has a great chance of keeping pace with his 9-2 record and 2.63 ERA from 2019. The A’s thrive on defense, but their lineup has some pop and knows how to score runs. Matt Olson is slowly developing into one of the best power bats in the league, and A’s have Matt Chapman, Marcus Semien, Stephen Piscotty, and “Mr. .247” Khris Davis to go along with him. I love this team this year.
Win-Loss Prediction: 36-24

Second Place: Los Angeles Angels
Okay, this is where I’m really beginning to put myself in the Freezing Cold Takes territory. (I also want to note that this prediction is assuming that Mike Trout doesn’t ultimately decide to sit out the season.) I really want to believe in the power of having the greatest baseball player of all time on your team, and what could be a better time to show off that power than a 60 game season? When people think of the Angels, they obviously think of Mike Trout, but they’ve finally got some really good lineup protection around him with Justin Upton, Shohei Ohtani, Tommy La Stella, Andrelton Simmons, and the newly acquired Anthony Rendon. Rendon wasn’t the only player that they signed in the offseason, as they also picked up starters Julio Theran and Dylan Bundy to slot in right behind Andrew Heaney. These two aren’t aces, but they are good enough to benefit from this solid lineup behind them. Throw in an average bullpen and the expected innings from the two-way Ohtani, and it looks like this team is going to be a strong contender in the AL West. Oh, and did I mention they signed Joe Maddon as their manager in the offseason?
Win-Loss Prediction: 33-27

Third Place: Houston Astros
I’m going to retire as a writer when the Astros finish as the only American League team with over 40 wins, but for right now, I’m hopping off the bandwagon. Everyone knows about the Astros cheating scandal, and everyone’s made their guesses as to how that will effect them this season. I actually think that they really benefit from the season not starting at the scheduled time and playing with no fans in the stadium. At least the external pressure of boos is off, but I think that the internal pressure remains. Jose Altuve, Alex Bregman, Carlos Correa, and George Springer all carry a massive chip on their shoulders and will have a point to prove that they are still good without the trash cans. This can negatively impact them especially if they struggle early and begin to play catch up throughout the rest of the season. But a lineup this strong should ultimately be fine in the long run. It’s the pitching that worries me. Aside from losing Gerrit Cole, Dallas Keuchel, and Charlie Morton over the last two off-seasons, the Astros have to come to grips with the fact that Justin Verlander is 37, Zack Greinke is 36, and the rest of their starters are WEAK. They also have a well-below average bullpen that struggled last year and made no big improvements in the offseason. This team is going to be good, but I think early struggles and blown games during the season are going to keep them just short of making the playoffs.
Win-Loss Prediction: 32-28

Fourth Place: Texas Rangers
I want to like the Rangers more than a fourth place finish; I really do. They outperformed themselves last season when they were still in the Wild Card hunt late into August. They added Corey Kluber, who is an ace when healthy, this offseason. They signed rotation depth with Kyle Gibson and Jordan Lyles. But there is still just too much missing with this team. The lineup is OLD with guys like Shin-Soo Choo, Todd Frazier, and Elvis Andrus still expected to play big roles. Can we really expect Joey Gallo to repeat the kind of season that he had in 2019? How many games will Willie Calhoun end up playing this year? What can we expect from the bullpen this year? These are the pressing questions that Rangers fans have to be asking heading into this shortened season, and, unfortunately for the team, I don’t think they’re going to be met with positive answers. This team is a year or two away from the old guys being able to pass the baton onto the young guys. Until then, this team’s ceiling is third place.
Win-Loss Prediction: 27-33

Fifth Place: Seattle Mariners
This team is terrible. The team was second-to-last in batting average and 23rd in ERA. And they didn’t really make any improvements this offseason. Mariners fans should be looking forward to the second seasons of Yusei Kikuchi and Justus Sheffield. And Evan White will likely be making his Major League debut. But other than that, there really isn’t anything to watch with this team. I wouldn’t even expect them to get off to the hot start that they did at the beginning of 2019. This team is going to be the punching bag for the rest of the AL West in 2020.
Win-Loss Prediction: 21-39