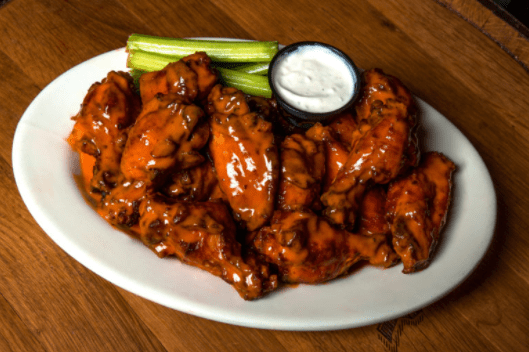 That is how J. Timothy’s Taverne in Plainville ,CT does it and they call it DIRT WINGS. I’ve never had wings you fry, sauce and then fry again…and then sauce again. They could call it anything and it wouldn’t matter because it is REALLY GOOD!

I had these when I was in Connecticut earlier this year to meet with ESPN. I did order the bucket because the folks I was with said “we promise you will eat more than you think”. They were right. They have other stuff on their menu but who cares.

They have instructions for how to order:

We have 5 flavors and 4 sizes. Choose a flavor and a size. But, each flavor can also be ordered “dirt style” (except Dry Rub, see below), something invented at the taverne in the mid-90s. So when you want to order wings we will ask you: 1) What flavor? 2) What size? 3) Dirt style?

Here are the options and how to order:

Original Buffalo – Our Buffalo wings are considered “medium” spicy. Not too hot. We are about flavor, not necessarily heat. Can we make them hotter? Slightly hotter, yes. But if you are expecting HEAT HEAT HEAT OMG these are so fire…nope. Can we make them more mild? Slightly milder, yes. But when you order straight-up Buffalo, they are medium spicy. Our Original Buffalo Wings have won numerous awards, year after year. The Food Network called our buffalo sauce “the best wing sauce in the nation!”. Watch the video here.

Honey Gold BBQ – a delicious mix of honey and golden BBQ sauce, not at all spicy. Not too sweet.

Sweet Red Chili – a delectable combination of sweet and spice with a kick of heat at the end. We tested about 15 new flavors for about 8 months in 2014 asking our guests for feedback. This was the overwhelming favorite.

Buffalo Chipotle Dry Rub – A bit spicy, a bit smokey. Our first dry rub wings! These can’t be done dirt style, thought they do have a base of our Buffalo Sauce.

If you’re not going to be eating or serving your wings right away, our Cold Wing Pack is the perfect solution! Click/tap here to learn about the Cold Wing Pack.

Choose Dirt Wings or no:

The “dirt” wing was invented at J. Timothy’s Taverne. Even though other places do call their wings “dirty-style” please do not accept substitutes. Our Dirt Wings are fried and sauced, then fried again and sauced again. We don’t charge extra for this! Some people call this double-sauced, double- fried. We just call ‘em dirt! It results in a wing that is a caramelized and a bit crispier. There will be charred bits and they are delicious. They are not burnt! That is the sauce caramelized on the wing.

Dirt wings were created by one of our guests. Barry was on our softball team. After the games he would come in with the rest of the team and order wings. He was nicknamed “Dirt” because he was the oldest one on the team, i.e. “old as dirt”. Ha. Barry was very sociable, he would talk and talk and tell great stories. His wings would sit while he finished his stories. By the time he was done talking the wings would be cold. He said to our Chef, “Just add some more sauce and re-fry them.” Everyone realized they tasted really, really good when fried and sauced again. Voila! The “Dirt” Wing was born. Thanks Barry!

The dirt on J. Timothy’s is dirt. That’s what this Connecticut institution calls its signature fried-sauced-fried-again preparation, allegedly named after the oldest player on a softball team of bar regulars. The result is delicious: that double-deep-fried shell finishes a few shades darker than hot-sauce orange and delivers super-crisp bites. The dirtying process puts sauce into the fryer, which mucks it up and necessitates frequent oil changes, so you know you’re getting the good stuff. Timothy’s was founded in 1985, but the building it’s in was built in 1789, so it’s pretty much as old as dirt, too. (That’s it for sentences about dirt. Promise.) — LB