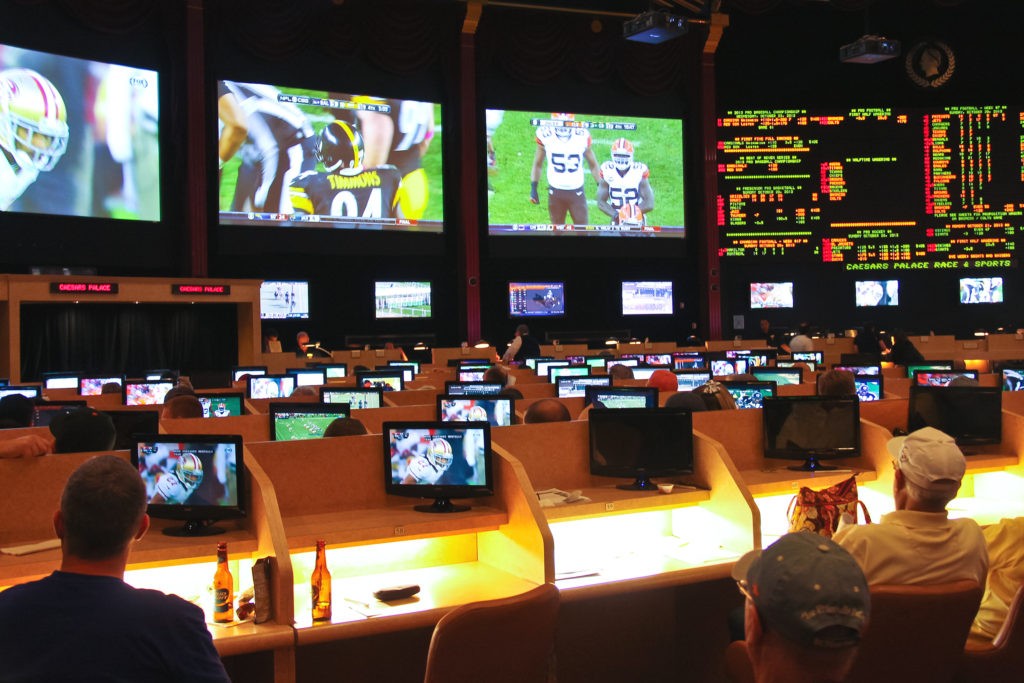 I’m writing this blog for the novice gambler that feels overwhelmed when talking to their friends because they don’t know what the specific terms mean that these seasoned gamblers are throwing around. I’m writing this because that’s where I was a few years ago. My friends would say “I just hit big on this parlay” or “I got screwed on the line again” and I’d just not my head and smile along. But now that I understand it, I want to help you understand it too. We’ll get started with the basic terms and make our way more into the weeds as we go. If you have any questions, leave them in the comments below, and I’ll get back to you as quickly as possible.

+ or – on the betting sheet: Every single bet carries either a positive or negative number associated with it unless it is EVEN. These numbers all relate to a $100 bet. So, let’s say you wanted to bet on the New York Knicks, and they were +120 that night. This means that a $100 bet will win you $120. But, let’s say the Knicks were actually favorites and had a line of -115. This means that in order to win $100, you would have to bet $115. So, any time you see a positive number, that means you will make more money than the amount you’ve wagered if your bet hits, but if you see a negative number, you will make less money than the amount you’ve wagered if your bet hits.

Spread Betting: Betting against the spread is the most common form of sports gambling. The spread, or line, is a number assigned by bookmakers that is used to “even the playing field” in gambling. The team or player that is favored to win will be given a negative spread while the underdog is given a positive spread. The amount of points in either direction will depend on how much better one team or player is than the opponent. For example, if 11-0 New England Patriots playing the 2-9 Cincinnati Bengals, the Patriots would be somewhere close to a 12.5 point favorite. (As an aside, spreads are often listed in 0.5 point increments to avoid a tie, or push, on the spread.) So, this means that the Patriots line would be listed at -12.5 and the Bengals would be listed at +12.5. If a person were to place a wager on the Patriots, they would need the team to beat the Bengals by over 12.5 points to win. If a person were to place a wager on the Bengals, they would need the Bengals to either win outright or lose by less than 12.5 points to win their bet. These bets typically payout between -105 and -115. This means the person placing the wager would have to wager between $105 and $115 to win $100.

Moneyline: A moneyline bet does not have a spread or a handicap. In this type of bet, the person placing the wager chooses the team (or player in the case of golf, tennis, etc.) that they believe will win the game or match outright. The team or player that is favored to win the game or match will payout lower odds than the underdog. To use the above example of the 11-0 New England Patriots play against the 2-9 Cincinnati Bengals, the Patriots will be heavily favored. Their payout may be something close to -300 while the Bengals payout would be close to +350. This means that you would have to bet $300 to win $100 on the Patriots, but a $100 bet on the Bengals would pay out $350.

Totals: Total, or over/under, bets are wagers made based on the total combined score of both teams playing in the game. For example, if an NBA game has an over/under listed of 212.5, the person placing the wager would need the total score of the two teams to equal a number greater than 212.5 if taking the over or less than 212.5 if taking the under. These bets typically payout between -105 and -115. This means the person placing the wager would have to wager between $105 and $115 to win $100.

Proposition Bets: Proposition (prop) bets are wagers made on a specific outcome in a game or match that does not relate to the final score of that game or match. These wagers are usually made based on a statistical event. For example, a bettor may place a wager on a player from the New York Rangers in the NHL to score over 1.5 goals that night against the New Jersey Devils. Or, the bettor might place a wager on who will win the opening tip off in an NBA game. These prop bets are also very common during the Super Bowl. Bettors can place wagers on all different types of events from the result of the opening coin toss to the color of gatorade dumped on the coach after a win.

Parlay: A parlay is a wager that requires multiple wagers on the same ticket. In order to win this type of bet, the person placing the wager must correctly predict each outcome on which they are betting. Parlays must be at least two bets, but they can include as many as the bookmaker will allow. For example, a person may place a wager on the New York Jets moneyline, the Seattle Seahawks moneyline, the San Francisco 49ers against the spread, and Aaron Rodgers to throw over 2.5 touchdowns. All of these outcomes would have to be correct in order for the bettor to win that ticket. The payouts for these parlays are determined based on the likelihood of each of these events happening. Typically, a bettor can get very good odds on a parlay with the knowledge that it will be difficult for all of the events to take place. Parlays do not allow you to bet on both the moneyline and the spread of the same game.

Round Robin: A round robin is similar to a parlay but requires at least three wagers. In the round robin format, a bettor will select multiples moneylines, spreads, props, etc. to wager on and place a specific bet for each leg of the round robin. For example, let’s pretend a person wants to bet on the Pittsburgh Steelers moneyline, the Buffalo Bills -3.5, and the Houston Texans +1.5. A round robin will then place a parlay on the Steelers and Bills, the Steelers and Texans, the Texans and Bills, and the Steelers, Bills, and Texans. The bettor will then have four parlays each paying out different totals. So, a $5 round robin bet on these teams will actually be $20 because the bettor is technically placing four bets. Unlike a parlay, the bettor does not need every wager to be a success in order to still win money.

Teaser: A teaser is a subset of a parlay. In a parlay, the bookmakers will sometimes allow the bettor to tease the spread of your wagers within the parlay. For example, if a person were to place a wager on the New York Knicks +11.5, the Dallas Mavericks moneyline, and the Miami Heat moneyline, the bettor could “tease” the Knicks from 11.5 points all the way up to +13.5 points if they would like to do that. This will decrease the payout of the bet but increase the chances of winning it.

Run Line, Puck Line, or Goal Line: The run line, puck line, and goal line bets are used in baseball, hockey, and soccer, respectively. These bets are the same as “against the spread” bets, but since the margin of victory is typically lower in these sports, the run line and puck line is usually 1.5 while the goal line is usually 0.5.

Futures: Future wagers, or futures, are wagers that predict the outcome of a future sporting event. For example, at the start of the MLB season, a bettor may place a wager on the Philadelphia Phillies to win the World Series. The odds for these types of wagers are typically listed in a ratio of units paid to units wagered. So, let’s say the Phillies odds to win the World Series are set at 40-1. This means that a $1 wager will payout $40 if successful. These types of wagers can typically be placed at any point during the season and don’t always have to be placed on something game related. In college football, a popular future bet is on the Heisman Trophy winner that season.

Head-to-Head: Head-to-Head wagers are reserved for sports that have multiple individual competitors. In these types of bets, the bettor will predict the result of one competitor against another and not on the overall result of the event. For example, in NASCAR, a bettor might place a wager on Joey Logano to finish ahead of Kevin Harvick for a particular race. The payouts of these types of bets will be determined based on the likelihood of the desired finish.

Half Bets: A half bet is a bet that applies only to the wagered outcome in the first or second half of a sporting event. These types of bets can be placed on the moneyline, spread, or over/under. For example, a bettor may place a wager on the New York Giants -3.5 for the first half against the Minnesota Vikings. The results of the second half of the game do not apply to this particular type of wager. The payouts on these types of wagers will be determined in the same way as traditional moneyline, spread, or over/under bets. These bets can also be applied to specific quarters in American football and basketball, specific periods in hockey, or a fewer number of innings than a full game in baseball.

In-Play Betting: In-play betting has become very popular for bettors over the last few years. In play bets can be placed on any bet listed above (except futures). Bookmakers are constantly adjusting moneylines, spreads, and over/unders throughout games with bettors typically able to place wagers until the end of the game. The payouts for these types of bets can sometimes get very high on underdogs. For example, if the Atlanta Hawks are beating the San Antonio Spurs 85-60 at the end of the third quarter, a moneyline bet on the Spurs might payout close to +1200 while a bet on the Hawks would payout close to -2000. These in-play bets encourage a bettor to place a $5 bet on the Spurs for the chance that the team comes back and the bet pays out $600.

Cash Out: A cash out bet can be performed when it appears that a bet will be a surefire loss. A player will lose their money on the bet, but they will be given back some form of free play token to boost their virtual bankroll. For example, if you bet on the New York Jets moneyline, but the Buffalo Bills score three first quarter touchdowns against the Jets, some sites will allow you to cash out. This means that you will have money in your virtual bank roll to place on other games, but you will not be able to cash that money out into your own pocket.