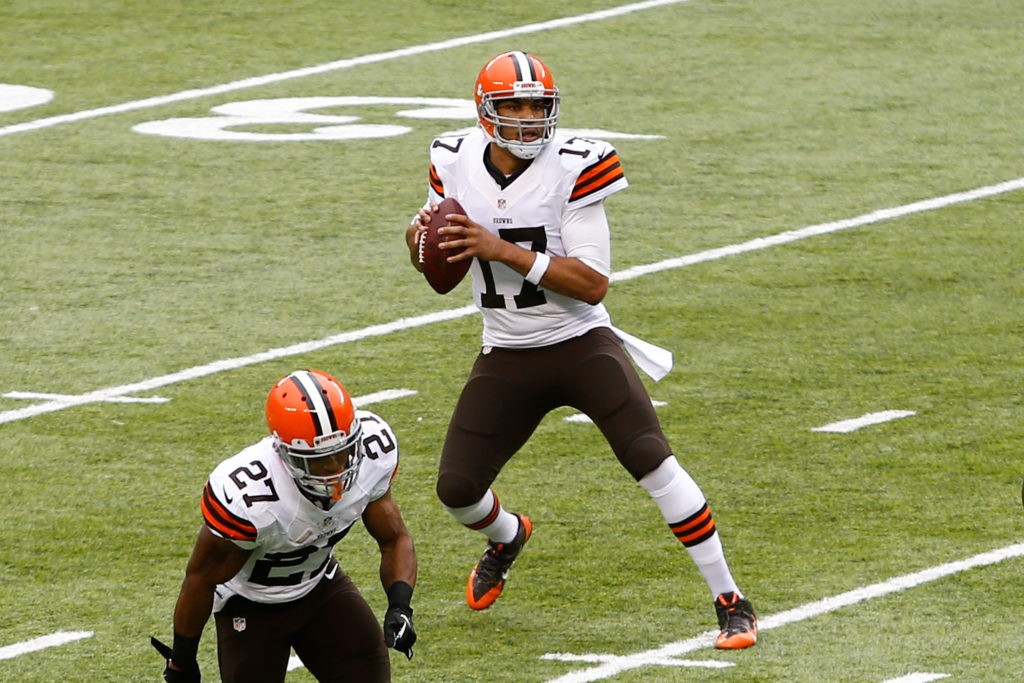 Broken Trail was an AMC original two-part miniseries movie that owned the 2007 Emmy Awards. It is about an uncle/nephew team that rescue Chinese girls from slavery, all while transporting five-hundred horses across the Oregon Trail. After all, 2007 was the deadball era of pop culture. MySpace, Transformers, Judd Apatow, emo-pop and Timbaland reigned supreme. Going from the pre to post iPhone threshold was major achievement for anything in culture. Unfortunately, Broken Trail, winner of three Emmys on September 16, 2007, did not pass through. Other nominees like The Office, Entourage, American Idol and The Sopranos, still are very much alive in this modern era. Others like Boston Legal, the relevance of Katherine Heigl, Heroes, and (egregiously nominated for outstanding directing) Studio 60 on the Sunset Strip did not.

Broken Trail was a good working title for a book about the Cleveland Browns from their franchise’s inception until 2007. Listing the low points, futile records and draft busts during that time would not just be a waste of time, but would truly be boring. That has always been my biggest problem with the failures of the Browns. There is no pizzazz to the losing, no maligned superstars, no real entertainment value in their cold, grass-stained 21-10 losses to Pittsburgh. The mere orange/brown/beige aesthetic calls to mind an out of business farmers’ market, instead of a football team. After Pro Bowl center LeCharles Bentley ended his career by tearing his ACL on the first contact play of practice, mid-season coaching changes, thirteen games of Charlie Frye, more names to the big jersey with the QB last names written on the back, a ho-hum 4-12 record the 2006 Browns crawled to a last place finish in the AFC North. The team signed Jamal Lewis going into the 2007 season.

The trail of the Cincinnati Bengals was a little more put together. They came into this season a year removed from an 11-5 record – only for Carson Palmer to tear his ACL in the first quarter of their home playoff game. The Bengals had entertainment value. Chad Johnson, an athlete as far ahead of his time as Roger Bannister was, and the couplet of TJ Houshmandzadeh and Chris Henry made for a passing attack that was shockingly modern. Their modernity continued with trading Corey Dillon for a high draft pick, adding respected veterans to a young defense prone to mistakes both on and off the field and investing in an offensive line that featured two All-Pros. The omnipresence of Marvin Lewis juxtaposed an energetic, talkative and dynamic group, and the 2007 Bengals were considered to be a legitimate playoff team.

The sun shines with a little more hesitancy in Cleveland. September 16, 2007 was a Week 2 matchup between both Ohio NFL teams. Carson Palmer resumed his usual duty as Bengals starting QB. Derek Anderson commandeered his spot on the big QB jersey by appearing in three games the season before. This year, he was given the keys to the 1991 Corolla that is the Browns. But, only after incumbent starter Charlie Frye was traded just days before, after being named the preseason starting QB by a coin flipped by head coach Romeo Crennel. Rookie Brady Quinn held the clipboard under that tentative Cleveland sun, unaware of the action he was about to witness.

Carson Palmer had a clean pocket on 3rd and 16. Already up 7-0 and getting the ball back after a Bengals punt, Palmer stepped up, seemingly getting his back foot caught in the turf, and threw a pass that changed Ohio football history. For context, Frye was pulled after an ineffective first quarter in Week One. Anderson started this game with a two-yard three and out, and already had Brady Quinn breathing down his elbow length undershirt. Palmer had a play here. Even with a four-man rush, Chad Johnson briefly got behind the Browns secondary. All games, all life events really, have one thing happen that make it matter. The dynamic change that wreaks through an ordinary man’s world, sending him on a hero’s quest. If Carson Palmer doesn’t under throw this pass, which is intercepted after a dive by Sean Jones, this article isn’t written. The Bengals may score again, Brady Quinn may enter this game. Romeo Crennel may lose his job. The Bengals, spoiler alert, may even win this game. The profound butterfly effect following every play in an NFL season that is so condensed and malleable, can send you into a hypothetical tailspin. But after the Browns took over on the Bengals’ 37, none of the hypotheticals mattered.

Anderson, an answer to a trivia question waiting to be written, threw for 328 yards, five touchdowns, all while weathering the history of the Cleveland Browns and 401 yards and six touchdowns from Carson Palmer. Jamal Lewis, the most boring man in fantasy football, a laborious runner who is as useless as a kicker in a PPR league, used his 4.9 40 speed to go for 216 yards on 27 carries. Lewis had four 100-yard games in the past two seasons combined, not going over 113 yards in a game since 2004. The final score was 51-45 Browns. The pregame over/under was 41.5.

The Browns had an opportunity to survive that coveted September 16, 2007 threshold. They went 10-6, sent five players, including Anderson to the Pro Bowl. They somehow missed the playoffs, losing to the same Bengals in a crucial Week 16 matchup, by a score of 19-14. Still, expectations were shattered, and the buzz around Cleveland was not just construction equipment and broken down buses. But as the iPhone’s popularity grew, the Browns’ dysfunction grew. As Amy Poehler, Stephen Colbert and Jimmy Kimmel were presenting the 2008 Emmy awards to their fellow threshold survivors and thrivers, Alec Baldwin, Bryan Cranston and Tina Fey, the Browns were losing once again to division rivals. This time, it was in prime time.

In 2008, the Browns went 4-12, Facebook overtook MySpace in the Alexa Rankings. Amazon passed the 600 million visitor mark, and eBay saw its share price drop dramatically. Katy Perry and Rihanna had number one Billboard songs, and Yellowcard and My Chemical Romance went on indefinite hiatuses. There was a glimmer on Blackberry screens throughout Cleveland, that maybe this was Cleveland’s year. Maybe this was Cleveland’s future. As Nola Johns says in Broken Trail, “Most men are afraid of failure in this world. It seems like some are afraid of success.”