In Praise Of: Khalil Greene 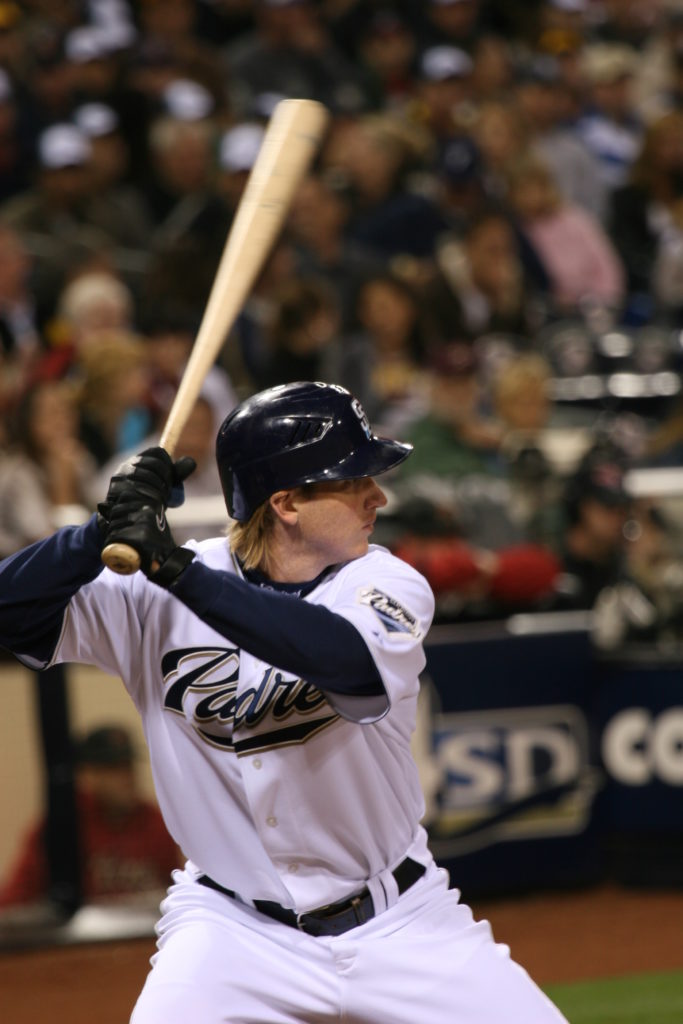 The definition of average was the 2005 San Diego Padres. A bargain bin of goatee’d players ranked in the high 70s in MVP Baseball, the roster is a dream for a “remember that guy?” discussion. Woody Williams, Ryan Klesko, Xavier Nady, Mark Loretta, Scott Linebrink, Brian Giles and company finished 82-80, bizarrely won the NL West by five games and promptly got swept by the Cardinals in the NLDS. In the midst of all the .270 hitters, and Sean Burroughs’ humongous head, was a slender, slick fielding shortstop, with loose, ripped sleeves, long platinum blonde hair with the face of a 12-year old, who adhered to the Baha’i’ Faith, expressed himself mostly through rap lyrics, and is considered to be one of the greatest college baseball players of all-time.

Greene’s decorated college career at Clemson came with massive expectations, after youth teammates and coaches compared him to Cal Ripken Jr. He was a four-year starter, won every major award his senior year, set multiple school and conference records and hit the most doubles in the history of college baseball. Khalil Greene stood out like a buoy in the murky and gray Padres lineup in particular, but he would have stood out anywhere. After being the runner-up to Jason Bay in a close Rookie of the Year Award race in 2004, Greene was no household name, but he was a solid contributor to a third-place team. But, in San Diego and in the complex universe of Khalil Greene, the pressure was on.

Greene’s statistics, truthfully, were legendarily average. A Khris Davis-esque three straight seasons of fifteen home runs, no All-Star appearances and a career batting average of .245. He never lived up to the immense talent that scouts had talked about. His 2005 year, which could have been a pivot point, was slowly enveloped by the dust around him. Though his appearance and name still stuck out amongst the mob of mediocrity, his frequent injuries and meandering statistics made him seem right at home. But Greene was never comfortable inside those walls.

This is written in praise of Khalil Greene, not just for getting hit by a pitch twice in one inning while he was at Clemson, but for the human side of the game. From third party accounts, it seems like Greene was burnt out from the game by the time he reached the big leagues. From a young age, Greene was viewed differently, so he worked differently. His diet, work ethic and attitude was considered to be at a professional level by age 11. Greene’s detached personality and introversion was well-known in the majors, but it was interpreted as singularly focused dedication. He broke his hand punching equipment, cut himself after bad at-bats and rarely gave interviews. But this was a time where mental health and professional sports operated in different areas.The world was very different just two months ago, two weeks ago, two days ago. So, in 2009, when Greene took a leave of absence from the game, it was probably as delayed as his resources were to better himself during that time. For the next two years, Greene was in and out of baseball, with the Cardinals and Rangers, looking to find solace in the game that gave him so much. He never found his footing again. Teammates and coaches haven’t heard from him since the Rangers voided his contract ten years ago.

The ‘what-if’ stories of sports are well-known. The tales of Bo Jackson, Mark Prior, Marcus Lattimore, Greg Oden, Robert Griffin, etc. will always keep fans wondering about careers robbed by health circumstances out of their control. You can start many sentences with “What if Khalil Greene” and have many different ways to complete it. What if Khalil Greene was at Clemson during the current era, and not the era where their football team lost the Tangerine Bowl to Texas Tech by 40 points; what if he wasn’t a part of that aging, lifeless Padres team, what if he was part of the current landscape, where his struggles could have been openly discussed, instead of misinterpreted? It was easy to see why Khalil Greene stood out, but maybe it should have been easier.